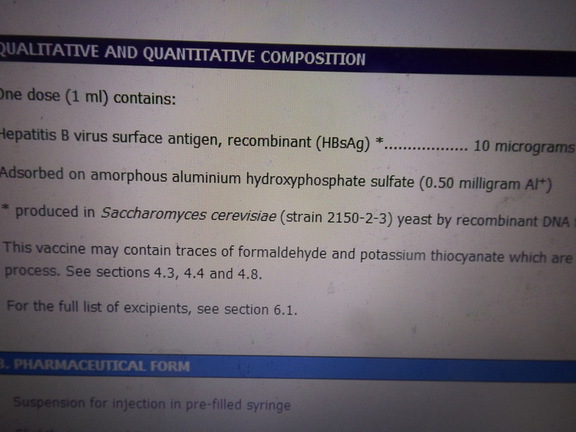 Photograph of Data Sheet Listing Potassium Thiocyanate, a Compound Containing Cyanide, as an Ingredient in Vaccines

I discovered that cyanide was used in vaccine production and can be present in trace amounts in some vaccines several years ago when I read a news report on the whistleblower Mark Livingston, an employee of Wyeth.

In his complaint, he described lab technicians being too afraid to work in the Prevenar vaccine area because of the CYANIDE involved.

‘In 2001 and 2002, Livingston says he repeatedly reported the violations to the managing director at the plant, an outside auditor, and a quality council of managers and nothing was done to correct the problems.

Livington says he was also concerned about the dangerous working conditions for employees. “I had many manufacturing technicians from 2000-2002 tell me,” he said, “they did not want to work in the Prevnar manufacturing area for fear of the chemicals used in the production process, including cyanide.”

“Sodium cyanide is a dangerous chemical,” he says, “mix it with water and you get hydrogen cyanide, the gas of choice used in the Holocaust.”

Sodium cyanide is used in the Prevnar manufacturing process, but trace amounts remain in the vaccine itself, according to Livingston.

There are in fact, he says, many toxic substances in vaccines. “Mercury, lead, aluminum, cyanide, it’s not a pretty picture,” Livingston warns, “for a child’s immune system, for unsuspecting parents and caregivers, who are never told about the presence of these chemicals, and for employees who have to keep their mouths shut or face losing employment,” he adds.’

I had the same response to this article as I had years earlier when reading a book on vaccines when researching for my daughter – I didn’t believe it.

I knew that vaccines contained traces of monkey kidney, human fetal tissue, aluminium or sometimes even thimerosal (49% mercury), something I initially disbelieved until a pharmacist showed me the small print.

I thought that despite everything else that goes in there, vaccine makers couldn’t be using cyanide, a deadly poison, in vaccines meant for tiny babies. I couldn’t imagine that anyone could be that stupid.

I was proven wrong when a news story emerged stating that Merck had discharged a cyanide mixture into Wissahickon Creek from their vaccine production plant. This killed all the fish and made the area unsafe for the general public. Merck refused to divulge to the media what the cyanide was used for.

The Wissahickon Creek incident is mentioned on the Environmental Protection Agency (USA) website:

‘The U.S. Environmental Protection Agency has identified a Merck and Co. pharmaceutical research facility in West Point, Pa. as a source of the cyanide-related discharge that killed more than 1,000 fish in the Wissahickon Creek last week…..In the process of an investigation by EPA’s mid-Atlantic region and the Pennsylvania Department of Environmental Protection (PADEP), a representative from the Merck facility notified EPA on Tuesday that about 25 gallons of potassium thiocyanate was released into the sewer system on the morning of June 13 from a vaccine research pilot plant.

Potassium thiocyanate is a chemical compound that includes cyanide.’

Legal Action Against Merck for Discharging Cyanide into Creek

See this link for the court documentation against Merck for cyanide spillage:

After discovering the name of the compound, potassium thiocyanate, the ‘cyan’ part of the name being cyanide, I set about trying to identify what it was used for in vaccine production and whether any cyanide would end up in the finished product – something I suspected because vaccine manufacturers cannot completely remove all traces of other products like antibiotics and growth mediums.

Cyanide is a Vaccine Elution Solvent

I found that cyanide – or potassium thiocyanate – is used as a vaccine elution solvent, that is, it is used to extract viruses or bacteria from the culture medium on which the vaccine is grown. For instance, measles, mumps and rubella viruses are grown on human fetal tissue (known as human diploid cells). The cyanide is then used to remove the viruses from this tissue so it is ready to be made into a vaccine.

‘To extract (one material) from another, usually by means of a solvent.’

See this page from Santa Cruz Biotechnology that mentions potassium thiocyanate as a vehicle for extracting antigen from a vaccine meant for rabbits:

These studies also mention its use in rabbit vaccines:

This elution process with cyanide is referred to as ‘KSCN treatment’ or ‘KSCN extraction’.

So if ever you see a vaccine data sheet, study or patent application referring to KSCN treatment, they have used cyanide in the manufacturing process.

For instance, the journal Human Vaccines mentions it in their article on the maturation of Hepatitis B vaccine virus:

‘In this paper, we further characterized the maturation of HBsAg particles with respect to their degree of cross-linking, morphological changes, and changes in conformational flexibility. The lipid-containing rHBsAg particles undergo KSCN- and heat-induced maturation by formation of additional intra- and inter-molecular disulfide bonds.’

Next I checked the data sheets of various vaccines to see if any cyanide – or potassium thiocyanate – was in the ingredients list, and sure enough, it’s in there. Vaccines made using cyanide may contain trace amounts of cyanide.

A data sheet for a Hepatitis B vaccine says in the composition section:

‘This vaccine may contain traces of formaldehyde and potassium thiocyanate which are used during the manufacturing process.’

“Allergy to formaldehyde and potassium thiocyanate – applicable to HBvaxPRO® as these substances are used in the manufacturing process and trace residues may remain.”

Meningitis vaccines have also been developed using potassium thiocyanate. FEMS Immunology and Medical Microbiology, 9th January 2006, list its use on page 3 of a study:

It is also listed in an experimental prostate cancer vaccine containing cancer cells and cyanide:

Potassium Thiocyanate is also present in many other vaccines that are in development and in several animal vaccines. It may also be present in other pediatric vaccines (Mark Livingston said it was contained in Prevenar pneumonia vaccine but it isn’t listed).

As extraction agents and subrates aren’t active ingredients of vaccines, they may not be listed so there is no way of knowing which vaccines were made using it.

Any vaccine today could be made and have trace amounts of secret cyanide and as long as the general public don’t know about it, they won’t protest.