The Home Birth Pages – My Story

The Hospital Experience – the start of my journey to unhindered birth 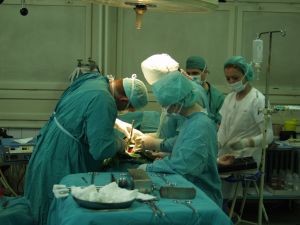 As I suffer from chronic vulvodynia, when I became pregnant at 18 years of age I just assumed I would *have* to have a hospital birth with an epidural. In fact, I wasn’t even sure if I could give birth vaginally since my husband couldn’t even touch me for weeks at a time during a flare up of my condition.

Doctors were in their infancy as far as treating the condition and the majority of doctors hadn’t even heard of it, since it was only discovered in 1988 and it was then 1995.

My obstetrician offered me a caesarean, but I asked to give birth normally so he suggested a ‘trial of labour’, and said if my pain became too great, I could ask for a section. I agreed.

On the day, after a normal 42 week pregnancy and an extremely gentle labour, I came to the hospital at 5cm dilated with no pain whatsoever. The midwives commented on how well I was coping but in reality, there was nothing to cope with, I’d had worse stomach bugs than that.

However, after a series of agonizing and intrusive internal examinations that I didn’t consent to, which felt as if I were being set on fire, I was crying. I tried to say no but they said I had to for the baby’s safety. As a frightened teenager, I didn’t have the knowledge or courage to stand up for myself, and my 21 year old husband was like a rabbit in headlights, holding my hand with an overwhelmed expression on his face.

I tried gas and air to deal with their examinations (whilst the contractions were still no bother at all) but it just made me feel dizzy and out of control so I threw the mask aside and refused to use it again. In the end I had an epidural so that I would be numb when they invaded my body with their hands without my permission.

This caused my baby’s heart rate to drop and they then cut me while I was shouting ‘No!’ and dragged her out with forceps. As well as mutilating my already nerve damaged genitals, they cut her face with the forceps and she came out bleeding and screaming her lungs out from the brutality of it all.

I was stitched up like a turkey and sent to the ward. All the NHS information and baby magazines had told me that an episiotomy scar would be ‘sore’. I consider that they were lying.

It was AGONY. I have had operations in my life, including major surgery, I have worn hip spikers, I’ve had migraines so debilitating that I have fainted, and since that time I’ve also had completely natural drug free childbirth, and I can tell you, NOTHING in my life has been as painful as the episiotomy. I felt as if someone had chopped my leg off. I couldn’t breathe for the firey pain, couldn’t sit, couldn’t even turn over in bed because if the mattress moved, I’d scream from the pain.

I couldn’t hold my baby for any length of time as the pain was so exhausting that I wasn’t able to sit. Consequently I couldn’t breast feed. The midwives tried to get me up and walking and it took half an hour for me to shuffle from one end of the ward to the other, in tears the whole time.

I begged for pain relief but all the staff would offer me was paracetamol. That’s like giving someone an asprin for open heart surgery. I wanted morphine, and lots of it.

At home, I tried to care for the baby but couldn’t because the pain was so all consuming, so I took to the bath, the only place I found any relief. Hot baths helped a little, so I’d lie in the bath and when the water got cold I’d top it up again. If I got out of the bath the pain would become unbearable again so I stayed in the bath for hours.

Once I tried to go to the kitchen to make my baby a bottle, since I was in too much pain to breast feed, and I couldn’t walk the few steps down the hall, and collapsed in tears. My poor husband had to care for both of us.

People said this agonizing pain would go in a few days, but instead it was getting worse. I became feverish and lost all my apetite. Having lost all interest in food, I lay in the bath or on the sofa and just slept.

It was when I started sleeping more than waking that my husband called the midwife. She said my wound was ‘nasty’, was infected and not only that, the infection had spread to my womb. She told him it was lucky he’d called her when he did, or I could have died from sepsis.

The GP visited my home and gave me several powerful antibiotics and the painkiller codeine. Finally someone was taking my pain seriously and giving me something stronger. After a few more days in a drug induced haze, my pain reduced and I was able to participate in caring for my baby.

When she was 10 days old, I was able to walk a few steps with only an ache and after about 3 weeks I was able to have a relatively normal life, however, the pain never went away completely.

I had additional problems with painful sex for 2 years after her birth, caused by the scar tissue. My daughter is now 16 years old and the scar still stings on and off. I can’t sit on hard chairs for very long, can’t touch the actual scar, find it difficult wearing jeans in case they rub, and I have to be careful with intercourse.

One day it started hurting as if it was newly done ( that was after 12 years!) and I missed my favourite TV programmes because I was sitting in a bucket of hot water and herbal remedy all night. As you can imagine, I was not impressed at being lied to by the doctors and the baby magazines.

I have been to the gynaecologist. He doesn’t know what to do about it. I’ve mentioned it to the GP and the midwife. Their suggestion?

LET’S CUT YOU AGAIN, WE DIDN’T DO IT RIGHT THE FIRST TIME.

Not on your life. Needless to say, I walked out in disgust.