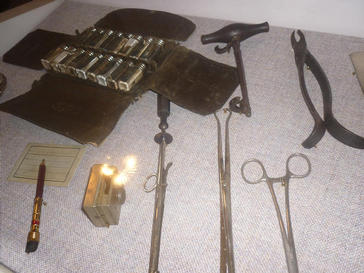 In the 19th and early 20th centuries, a lot of people lived in poverty without proper food, housing or sanitation. This meant that larger numbers of people died at those times from infectious diseases. The same is true in war times. We no longer die in such great numbers because of inventions like the indoor plumbing, adequate food for everyone (for the first time in history), heating, decent housing and contraception. Contraception has ensured that most women only have 2 or 3 children and so she is more able to bear a healthy child if she can take care of herself and her child.

Alcohol abuse is a causative factor in diphtheria, as is underlying disease.

It stated in ‘Medical World’, 1931, p.627, that ‘”…shows an interesting and conclusive fashion the definitive effect of school buildings, their construction and sanitation, on the spread of diphtheria. The highest incidence was observed in those schools where sanitation is most deficient and ventilation and lighting the least satisfactory. The brightest and airiest school showed the lowest incidence, and the incidence throughout all the schools placed them in exact order of sanitary virtue. Moreover, the incidence indicated the schools where malnutrition in the children is most conspicuous.”

As we can see from the above, over-crowding and malnutrition played a key role. By the time vaccinations were introduced, most of these killer infectious diseases had become more benign. The vaccine is also known not to be effective in many cases, and may actually cause the spread of the disease. Medics have always known this vaccine doesn’t work and have been writing about it since it was invented. For instance, in the ‘Practitioner’, April 1896, it was written ‘that the serum did not, to any appreciable degree, prevent the extension of the disease to the larynx; all the severe cases died, and the good result in the lighter ones was attributable to the mild type of the epidemic.” The doctor also states that, at the Hospital of Bligdam, Copenhagen, “the mortality from diphtheria remains the same after, as it was before.’

Dr. Joseph Winters published a book, ‘Clinical Observations upon the Use of Anti-Toxin in Diphtheria’, in which he stated: ‘percentage of mortality is not only misleading, but is absolutely worthless unless accompanied by the actual number of cases reported and the actual number of deaths.” He also declares that “the serum has an injurious effect, and will certainly be abandoned. Also, the famous Dr. Hadwen wrote in his booklet, ‘The Anti-Toxin Treatment of Diphtheria: In Theory and Practice’, that in 1895 in Berlin the mortality rate from diphtheria was 15.7% (before any vaccination). By 1900 (after vaccination) this figure had risen to 17.2%.

In more recent years there have also been numerous studies of ‘failure’ of DPT vaccine to ‘immunize’ against the diseases it was designed to prevent. As an example, here are some studies:

Journal of Infectious Diseases, vol. 179, April 1999; 915-923. “Temporal trends in the population structure of bordetella pertussis during 1949-1996 in a highly vaccinated population “Despite the introduction of large-scale pertussis vaccination in 1953 and high vaccination coverage, pertussis is still an endemic disease in The Netherlands, with epidemic outbreaks occurring every 3-5 years.” One factor that might contribute to this is the ability of pertussis strains to adapt to vaccine-induced immunity, causing new strains of pertussis to re-emerge in this well-vaccinated population.Vaccination against whooping-cough.

Efficacy versus risks (The Lancet, vol. 1, January 29, 1977, pp. 234-7): Calculations based on the mortality of whooping-cough before 1957 predict accurately the subsequent decline and the present low mortality… Incidence [is] unaffected either by small-scale vaccination beginning about 1948 or by nationwide vaccination beginning in 1957… No protection is demonstrable in infants.”

Another reason for the fall in infectious disease rates is that diseases are classified according to vaccine status. For instance, tonsillitis and mild Diphtheria have identical symptoms: severe sore throat, swollen glands in the neck, bright red tonsils and a green/yellowish or grey discharge at the back of the throat. With severe Diphtheria, this discoloured film is impossible to remove and it may block off the airway and cause respiratory problems. Essentially, in milder cases there is no difference between tonsillitis and Diphtheria and vaccinated patients would simply be recorded as tonsillitis. Also, doctors do not test for Diphtheria anymore so they wouldn’t know whether it was present or not, and most doctors do not know what symptoms to look for to diagnose it, so all of this would skew statistics.

This is also a sanitation disease and can be caused by vaccination polluting the internal system.The vaccine doesn’t work and never has and the world’s only ever double-blind controlled trial on vaccination (BCG) in the early 1970s which proved it didn’t work. However, it took almost 30 years of administering useless vaccine to people before they stopped its use.The study stated: ‘The efficacy of the TB vaccine is 0%’ (Bulletin of the WHO, Tuberculosis Prevention Trial, 57 (5); 819-827, 1979).

According to Dr. Surinder Bakhshi, Consultant in Communicable Diseases: ‘BCG, the most used vaccine in the world since it was introduced more than 50 years ago, has made no difference to TB in countries which rely solely on it to halt its spread. It has never been claimed to prevent TB, but even the evidence of its protectiveness is patchy and historical. And there have been no studies of its effectiveness in the past three decades.It may leave an ugly scar and, indeed, do more harm than good. Further, as TB, with rare exceptions, is largely a disease of the elderly in the Western world, vaccinating children doesn’t make sense. TB in Britain is a legacy of its empire. As long as people from third world countries come and settle here, there cannot be a let-up in its spread.People who come from high prevalence countries will continue to harbour TB germs in their bodies until they die. The World Health Organisation has set its face against vaccination and routine screening. It advocates effective disease management — early diagnosis and supervised treatment — to contain it and avoid its spread to the host community. Vaccination wastes resources, gives false hope and distracts attention from what needs to be done.’(Letter, the Sunday Times, 15 April 2001).

Isolation worked in the old days and its still one of the most effective means of preventing disease. Other diseases like Scarlet Fever and Typhus disappeared to virtually zero without vaccination. Chickenpox, which is not vaccinated for in this country and in some other countries, is also declining in incidence.

Measles is a disease which is mild in most cases. The figures the DOH use are from the third world, not of Western children. They also include children who have pre-existing conditions, those who are malnourished and those whose measles was treated with anti-pyretics (which is known to cause measles side-effects).

In 1967, Christine Miller from the National Institute for Medical Research, London, published a paper on measles, stating: ‘Measles is now the commonest infectious disease of childhood in the UK. It occurs in epidemics in which the total number of cases usually exceeds half a million…there is no doubt that most cases in England today are mild, only last for a short period, are not followed by complications and are rarely fatal.’

Also in the Practitioner, November 1967: ‘some physicians consider that measles is so mild a complaint that a major effort at prevention is not justified.’

After the measles vaccine was introduced in 1968, followed by the MMR in 1988, the disease suddenly became more serious. According to the BMA Complete Family Medical Encyclopaedia, 1995: ‘measles is a potentially dangerous viral illness…prevention of measles is important because it can have rare but serious complications…it is sometimes fatal in children with impaired immunity.’

According to the DOH, in their book ‘Immunisation Against Infectious Diseases’,‘Before 1988 (when the MMR was introduced) more than half the acute measles deaths occurred in previously healthy children who had not been immunised.’ They quote the study C L MILLER. Deaths from measles in England and Wales, 1970-83. British Medical Journal, Vol 290, 9 February 1985, but if you actually read this study (which they are relying on parents not doing), you will find it actually says:
‘No attempt was made to establish further clinical details, vaccination history, or social class.’ – i.e. they didn’t know the vaccine status of the individuals. And: ‘90% of deaths in those previously normal occurred in those over the age of 15 months, when the vaccines are usually given’. These children were probably vaccinated prior to dying of measles as they were of vaccination age.

In the case of tetanus, unlike other childhood diseases, it isn’t possible to gain natural immunity to tetanus. If you’ve had it once, you can have it again. The body does not produce antibodies to Clostridium Tetani. Vaccination is the act of injecting a viral or bacterial substance into the body to make it produce antibodies to that disease. However, since no natural antibodies can be made, then there is no possible way that artificial antibodies could be made either. If the disease cannot give you protection, then how can a vaccine? It is likely that any raised antibody level seen after vaccination is the result of adjuvants (toxic heavy metals which are added to increase the body’s antibody response). In the case of tetanus vaccine, this substance is aluminium.

Antibodies themselves are not an indication of immunity – this is just one function, which is vastly different from whole body immunity. All vaccination does is alter the expression of diseases and weaken our immune systems because we don’t have as much opportunity to experience the wild disease. Whilst we have less infectious (self-limiting) illness, we have more chronic (long-term) illness.