Infectious Diseases: Diphtheria (In the Vaccinated). 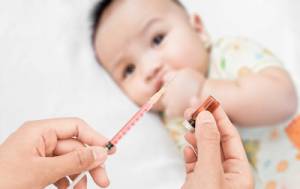 Health Ministry Concerned About Why Inoculations Failed To Work

Ukraine’s diphtheria inoculation campaign last year has failed to provide nation-wide protection. Last week, the Ukrainian Ministry of Health revealed that, in the first 5 months of this year, some 1350 cases of the disease had been reported, of whom 15 died. Although the total is 510 less than for the same 5 months in 1995, the Ministry is clearly concerned about why the inoculations failed to work, and has launched a special investigation. One explanation that has been put forward is that vaccines received from western programmes of humanitarian aid are “not very effective”.

The break-up of the Soviet Union left Ukraine without a drug industry of its own, thus its health service is largely dependent on donations. Such an allegation, even if eventually proved unfounded, could provide a weapon to politicians who oppose closer ties between Ukraine and western Europe.

An outbreak of respiratory diphtheria occurred among highly-vaccinated trainees at a Latvian military academy in August – September 2000. We reviewed immunization, clinical and laboratory records and administered a questionnaire to obtain data on exposure factors. Among 207 trainees, 45 (22%) diphtheria cases and 79 (38%) carriers of toxigenic Corynebacterium diphtheriae were identified. All patients survived; 1 had severe myocarditis. Sharing cups was a risk factor for infection. Over 85% of trainees had received ≥5 doses of diphtheria toxoid. Neither infection nor disease was associated with the number of doses or interval since last dose. However, the risk of disease was lower and diphtheria antitoxin levels were higher among trainees who received their last booster dose with higher-antigen diphtheria toxoid (DT) instead of lower-antigen Td. Outbreaks of mild diphtheria can occur among highly-vaccinated persons living in crowded conditions with intense exposure; high-antigen diphtheria booster-vaccination might provide better protection under these conditions.

In 1999, a case of diphtheria in a 32-year-old woman was reported. The patient developed a sore throat immediately after participating of a five-day meeting with European workers in Rio de Janeiro. Her history included complete pediatric immunization (DTP) and three doses of adult formulation tetanus and diphtheria toxoid (dT) two years earlier. Clinical diagnosis of diphtheria was not made until microbiologic examination of specimens confirmed toxigenicity of Corynebacterium diphtheriae var. gravis, a biotype currently found circulating within Europe where diphtheria remains epidemic. This case reinforces the potential susceptibility of Brazilian adults to epidemic diphtheria in the vaccine era.

Epidemic diphtheria may occur despite fairly high levels of childhood coverage. The worst epidemic of diphtheria in postvaccination era (³ 157,000 cases and 5,000 deaths) demonstrated conclusively the potential susceptibility of adults to epidemic diphtheria in the vaccine era. In 1990, diphtheria reemerged in the Russian Federation and spread to all Newly Independent States (NIS) with a high proportion of cases in adults, 64% to 82%, respectively. Severe disease and a high percentage (30%) of fatal cases were documented among vaccinated individuals (2,14).

The spread of epidemic seemed facilitated by large scale population movements; socioeconomic instability, partial deterioration of health infrastructure; delay in implementing measures to control epidemic; inadequate information for physicians and the public; lack of adequate supplies for prevention and treatment in most of the countries (2,8).The reasons for reemergence of epidemic diphtheria in countries where immunization programs had nearly eliminated diphtheria are not fully understood but are thought to include the introduction of toxigenic C. diphtheriae strains of a new biotype into the general population, besides low coverage with diphtheria vaccine among children and large gap of immunity among adults (4,22).

Despite the success of mass immunization in many countries diphtheria remains a serious health problem within many regions of the world.

95% of Cases of Diphtheria in the Vaccinated

A life-threatening disease has made a comeback in twin cities. Cases of persons falling prey to the potentially fatal bacterial ailment diphtheria are on the rise. The baffling part is that 95 per cent the diphtheria cases reported from January 2009 are those of adults, who were inoculated during their childhood.

Medical authorities suspect three reasons for the incidence of diphtheria – waning potency of the vaccine; patient not taking the booster doses and other environmental factors. Last year, 300 cases of diphtheria were reported in different governments hospitals in the State capital.

Strangely, in January and February of this year, the number of diphtheria cases reported has already touched the 100 mark. All these cases have been reported from slum areas and a majority of the patients are from economically weaker sections.