Mercury Free Vaccines Still Have Mercury In Them 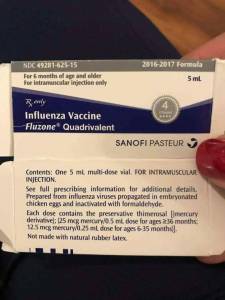 Flu shot full of mercury for babies and pregnant women

Excipients are substances used in the production of vaccines which are not actual added ingredients in the vaccine.

These excipients, including mercury, remain in trace amounts in the vaccine. The Minnesota Department of Health, USA, say:

‘Thimerosal is still used in the early stages of the manufacturing process of a few vaccines to ensure the production line is sterile. It is removed through a purification process, with only trace remaining (about 1/100th of the amount found in older vaccines).’

There is NO safe level of mercury or it’s derivative, thimerosal.

Currently, according to the CDC, the following vaccines which are marketed as mercury free, actually do have mercury in them (less than 3mcgs per vaccine, but still dangerous to human health).

‘Although Novartis’ single-dose prefilled 0.5 mL syringes of Fluvirin seasonal flu vaccine are preservative-free, these vaccines may contain trace amounts of mercury (≤1 mcg per 0.5 mL dose) leftover from the manufacturing process. When disposing of a full or partially used sharp syringe containing a vaccine with thimerosal, dispose of the sharp as dual hazardous and biohazardous waste.’

John Hopkin’s also list the Japanese Encephalitis vaccine JE-VAX as having 0.007% of thimerosal in it, even though the CDC no longer list trace amounts of thimerosal in the JE-VAX in their pink book.