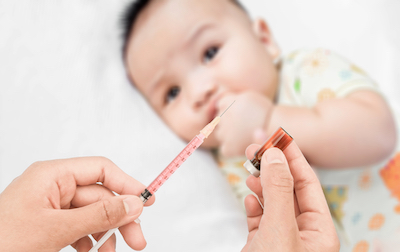 Posted 16th October 2017 in MMR 772 0 0
Sakchhyam used to be quite capable, as his name suggests. But a seemingly harmless booster dose of measles vaccine has turned the world upside down for the six-year-old, who now has to cope with failing eyesight.

Sakchhyam Adhikari was administered the measles vaccine on December 11, 2008, at his school, Bibhuti Vidya Mandir, in Chandragadhi, Jhapa district. The same day the first grader, who was then in upper KG, started vomiting and developed rashes.

“My mother-in-law could not understand the severity of the case and so did not take him to hospital. He turned seriously ill after a week and we took him to Mechi Zonal Hospital at Bhadrapur,” says the boy´s mother Ramala, an assistant nurse midwife at the Anarmani Health Post.

The zonal hospital diagnosed the disease as Steven Johnson´s Syndrome (SJS) and referred the case to BP Koirala Institute of Health Sciences, Dharan, which confirmed the disease and called it vaccine-induced.

SJS is said to be very rare, with one case per million, and the majority of them are believed to be idiopathic (arising spontaneously).