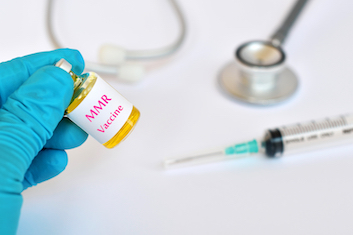 The highest risk of association with aseptic meningitis was observed within the third week after immunisation with Urabe-containing MMR (risk ratio (RR) 14.28; 95% confidence interval (CI) from 7.93 to 25.71) and within the third (RR 22.5; 95% CI 11.8 to 42.9) or fifth (RR 15.6; 95% CI 10.3 to 24.2) weeks after immunisation with the vaccine prepared with the Leningrad-Zagreb strain. A significant risk of association with febrile seizures and MMR exposure during the two previous weeks (RR 1.10; 95% CI 1.05 to 1.15) was assessed in one large person-time cohort study involving 537,171 children aged between three months and five year of age. Increased risk of febrile seizure has also been observed in children aged between 12 to 23 months (relative incidence (RI) 4.09; 95% CI 3.1 to 5.33) and children aged 12 to 35 months (RI 5.68; 95% CI 2.31 to 13.97) within six to 11 days after exposure to MMR vaccine. An increased risk of thrombocytopenic purpura within six weeks after MMR immunisation in children aged 12 to 23 months was assessed in one case-control study (RR 6.3; 95% CI 1.3 to 30.1) and in one small self controlled case series (incidence rate ratio (IRR) 5.38; 95% CI 2.72 to 10.62). Increased risk of thrombocytopenic purpura within six weeks after MMR exposure was also assessed in one other case-control study involving 2311 children and adolescents between one month and 18 years (odds ratio (OR) 2.4; 95% CI 1.2 to 4.7). Exposure to the MMR vaccine was unlikely to be associated with autism, asthma, leukaemia, hay fever, type 1 diabetes, gait disturbance, Crohn’s disease, demyelinating diseases, bacterial or viral infections.

The design and reporting of safety outcomes in MMR vaccine studies, both pre- and post-marketing, are largely inadequate. The evidence of adverse events following immunisation with the MMR vaccine cannot be separated from its role in preventing the target diseases.